International pepper dealers are receiving increasing evidence that new crop shipments from the Indonesian origins of Lampong and Muntok will be delayed.

A report from Van der Does Spice Brokers stated: “More and more reports arrive at our desks that the export of new crop material for as well Lampong as Muntok material will be delayed. The first shipments for Lampong black pepper are foreseen for the end of July or even early August. From Bangka (for Muntok white pepper) we foresee shipments not earlier than August, probably the second half.”

Crop estimates vary. There seems to be a general consensus that Lampong black pepper output will reach 27,500 tonnes. “For white, we are a bit more in the blind: 14,000-16,000 tonnes seems to be the general expectation,” the company added.

The quality of Muntok white pepper will be significantly better than that of last year’s crop. “More fresh water seems to be available to do proper washing of the pepper and this should improve the colour significantly,” Van der Does Spice Brokers explained.

Meanwhile, the pepper market in Vietnam has been moving more or less sideways for a long time now. The reasons remain the same: slow arrivals from the domestic suppliers (farmers and middle men) that are reluctant to sell the material they have in hands.

“A continuous demand from China (cross border trade) keeps this market moving in the same direction,” the report added.

The company finds that currency issues are having an impact. The US dollar has weakened slightly against the Vietnamese dong, giving the offers a slight upward push. For European buyer this has hardly had an effect since the Euro improved against the US dollar over the same week in early June.

Van der Does Spice Brokers also noted that it is becoming increasingly difficult to procure material from Vietnam that fits the EU legislation for pesticides.

“Most ‘sound’ material is sold by now and we still have seven to eight months to go until new crop,” the company warned.

Van der Does Spice Brokers expects India to remain priced out of the market and observes that there are reports from Brazil that too much rain has been falling, which has damaged the forthcoming crop. All eyes are therefore Indonesia.

However, in view of the crop delays from this origin, the company is not positive on the hopes that Indonesia will bring some relief. Moreover, it is unlikely that Indonesian pepper exporters will sell cheaply as they are fully aware of the global situation and have the financial clout to hold back stocks.

Van der Does Spice Brokers pointed out that buyers in Germany, the Netherlands, Japan, Korea and Taiwan favour Indonesian pepper and this preference is not just based on the origin’s lower instances of pesticide residue.

“Buyers from these countries are willing to pay a premium for genuine Lampong and Muntok pepper,” the report added. 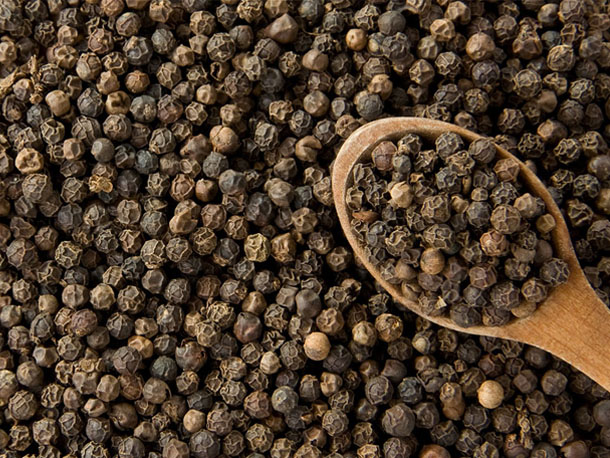